As we move into the homestead and start working through projects for the spring – a windy day brought a welcome surprise as the local affiliate of Cleary Building Corp – the team at Shamrock Buildings in Fort Collins, Colorado – was able to fit in the wall project – finishing the barn!

When we first started looking at the property, the barn was one of the big plusses of this homestead location back when we asked the question is this the one? At the same time, it was originally built as a horse barn for some reason, and as a result the largest segment of the barn was built three sided. And a separate portion was enclosed and minimally insulated.

Shortly after moving in, we reached out to the Shamrock team – who originally built the barn back in 2012 – and asked “can you find the plans for this thing?” Subsequently when they dug the plans out of storage, they asked if they could be of service. Lauren and I were really focused on moving in, but almost off hand I asked, “Would you be able to put a fourth wall on the barn?”

I had already done some rough planning and realized that doing it myself was feasible but would require a couple weeks of work and a few thousand dollars.

To my surprise, they came back and said “for just a bit we could have it done in 2 days…. but we are probably months out for materials and crew assignment….” We worked together to figure out what the right configuration of doors would be for our long term needs, and put the plans in place.

The team reached out just a week or so ago and said “the material all got here quickly, we will soon call once we figure out what our schedule looks like”. At that point I thought it would still be weeks….

A Windy Day in Cheyenne

Recently, however, a storm front went through well north of where we are and as a result the team at Shamrock Buildings gave me a call and said “we could have a team there today if you are ready to go, but we need to know now.” I said, of course, “let’s go!” Turns out – its too windy for a project they had in progress but already had a crew committed – why not knock out my little side project while its too windy for them to go do the scheduled build?

Quickly the team got to work, with a couple trucks, a single six foot ladder, and a lot of experience. I kicked off the day with the crew doing a quick review walk. It turned out one of the people leading the team was a junior worker back when the barn was built! It’s pretty amazing to bring the team back and someone with that experience to the improvement project.

As the day went on, the wind picked up here. Ultimately, the team had to make the choice to call it finished for the day. After preparing the framing to tie into the top of the wall, we would need to wait to add the steel fascia until the following day.

Steel Face to Finish the Barn

Day two, the same team came back and had very little extra to do in the calm morning. For the combined team, it really came down to less than a half day’s work to add the steel face. To me, it was like magic, these guys had so much experience for how to get the sheets up there, and speed through the process of bolting them on.

With a pretty good crew, just a few hours over two days resulted in a finished barn. This is a project that would have taken me weeks to finish and a couple thousand dollars in raw materials. I wont say that it was cheap – it wasn’t. Yet, in the face of the long list of other things we need to get done this spring, spending the money was totally worth it.

The final product was really something that looked sharp – from the outside I had no real way to tell that these two projects were done nearly a decade apart! The team did fantastic, and now I need to think about the next few projects finishing the barn.

Lauren and I are really happy with the result. While we have to wait to tackle other projects on the property right now, we definitely plan to come back, clean up and upgrade some of the electrical installation, add animal doors, create stalls, establish the drive through foundation between the rolling doors, and create a dairy room. These are all probably things for the winter, or even early spring next year. We need to think about the right timing for the family to add dairy animals. Right now – one step at a time! Let’s get the garden and the chickens going, first.

(Incidentally, if you need a farm building on your property – a shed, a horse barn, a dairy barn – give the network of builders at Cleary a call. The building construction and peace of mind is worth it.) 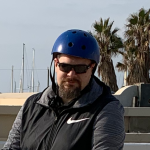 After spending my whole career in technology, working in more than 15 countries on 5 continents, our family realized we needed a more natural lifestyle. Now we are finding opportunities to shift to homestead living with a focus on God’s blessings, gratefulness, and the healthy provision of animals and the soil.

We use cookies on our website to customize your experience by remembering your preferences and repeat visits. By clicking “Accept”, you consent to the use of ALL the cookies. We do not sell your information and never have. New laws require this notice and consent.
Do not sell my personal information.
Cookie settingsACCEPT
Manage consent

This website uses cookies to improve your experience while you navigate through the website. Out of these, the cookies that are categorized as necessary are stored on your browser as they are essential for the working of basic functionalities of the website. We also use third-party cookies that help us analyze and understand how you use this website. These cookies will be stored in your browser only with your consent. You also have the option to opt-out of these cookies. But opting out of some of these cookies may affect your browsing experience.
Necessary Always Enabled
Necessary cookies are absolutely essential for the website to function properly. This category includes cookies that provide basic functionality and security features of the website. These cookies do not store any personal information.
Non-necessary
Any cookies that may not be particularly necessary for the website to function and is used specifically to collect user personal data via analytics, ads, other embedded contents are termed as non-necessary cookies. It is mandatory to procure user consent prior to running these cookies on your website.
SAVE & ACCEPT